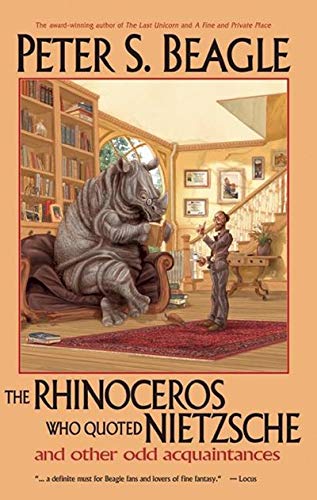 Peter S. Beagle’s The Rhinoceros Who Quoted Nietzsche and Other Odd Acquaintances celebrates the beginning of Beagle’s extraordinary career as a fantasist. Widely available for the first time and with a new preface by the author, this delightful book contains seven short stories and three essays by one of the most popular authors in the history of the fantasy field.

The Last Unicorn, Beagle’s most beloved novel, was an underground best-seller in the late 1960s and 1970s and is still in print and enchanting new readers today. It reached an audience far beyond the market for fantasy books, tying in with an emerging counter-culture and selling hundreds of thousands, if not millions, of copies. The Rhinoceros Who Quoted Nietzsche contains two of Beagle’s popular unicorn stories, ?“Professor Gottesman and the Indian Rhinoceros” and ?“Julie’s Unicorn,” as well as “?Lila the Werewolf” (anthologized in the Oxford Book of Fantasy) and a tribute to J. R. R. Tolkien, ? “The Naga.”